Every weight loss and wellness journey is different. Everyone has their own unique story to tell and I don’t know about you, but when I hear how someone made a drastic change to their health and well being, it motivates me to do the same!

So, I wanted to invite Kelly Leardon onto the podcast to talk about her wellness journey because not only is it inspiring, but she actually used a lot of the same methods we talked about in the previous episode of the podcast – “Lisa’s Wellness & Weight Loss Journey.”

In this episode, we get stuck into what Kelly did to boost her nutrition, lose weight, and get her "mojo" back. It’s a great story and you’ll discover a few great resources along the way in case you wanted to try any of these things out for yourself!

As you may know, Kelly joined the Organize 365 team at the beginning of 2019. She keeps me on my feet for sure and I’ve never met anyone as good at setting goals and smashing them, too!

When you hire someone onto your team, it does two things. First, it takes tasks off your list. Second, it forces you to level up your skills because you have to be more productive, proactive, and profitable. So, I’m so happy that Kelly and I make such a great team.

Interestingly, when she first joined, we were both in a very similar stage of our lives where we wanted to prioritize our wellness and weight loss. My main reasoning to do so was because, hey, I want to live to be 100 years old… you know, like one of those ancient tortoises.

Kelly wanted to slim down since because she has such a small frame, she felt that losing 15 pounds or so would really help her look and feel better. Revitalizing her energy was a huge motivator for her and one of the main things that kept her so focused along the way. Plus she  has a fabulous wardrobe and wants to keep it!

Kelly began her weight loss and well being journey by adding new monthly habits to her routine. Although she isn’t one to set concrete New Year’s resolutions, she is amazing at setting goals for herself and seeing them through until the end.

It started very simply. She wanted to lose weight, 15 pounds to be exact. To help her achieve her goal, she decided to do one new habit each month and stack them on top of each other like pieces of a Jenga game.

If there’s something you should know about Kelly, it’s that she’s extremely productive. Like, I know I’m productive but, she’s next level!

Productive people think very similarly. When we have a goal, we analyze our existing habits and look for room for improvement. We make small changes consistently over time and if we backslide on one of the habits, we circle back to it the next month and stick to it.

Kelly didn’t want to come up with a bunch of new habits that she couldn’t stick to. In a way, it’s like The Sunday Basket, where you’re stacking things on top of each other. You don’t have to go all in at once, but starting small and remaining consistent is key.

Tracking What You Eat And Other Habits

Kelly started her wellness journey by tracking what she ate. In January, she began to write down everything she ate and keep a record of what she was putting into her body.

When February came around, her new habit was to drink more water. So, she got a cute water bottle that had different times of the day on it in descending order. She made it her goal to empty the water bottle each day and it wasn’t long before she was drinking 10 cups of water a day.

March was when she decided to clean up her diet and jump into the “Faster Way to Fat Loss” program that we talked about in the previous episode of the podcast.

In April, she let herself have a treat once a week. This could either be a cheat meal or a sweet dessert. She also started to interject some workouts into her routine and would do some home workouts a few times a week.

She then read the book, “The Miracle Morning,” and that helped her to stay focused and not lose sight of her end goal.

Stacking habits on top of each other as you go is a great way to keep your mind focused and you’re less likely to give up because you’re taking smaller, but consistent steps.

A Closer Look At The “Faster Way to Fat Loss”

Although I also did the Faster Way, Kelly stuck to a far stricter regime than me so I asked her all the questions I know you’re all dying to know the answers to!

A huge part of the program is intermittent fasting. This is referred to as the 16:8 protocol, which means you don’t eat for 16 hours of the day and then you eat within an eight-hour window.

Kelly discovered that intermittent fasting, along with counting her carbs and macros, gave her tons of energy she never knew she had. Intense workouts and counting macros were also a huge part of the program.

At first, she had no idea how to count macros (who does, right?), but the program walked her through it. Thankfully, there are only three macros you have to count and that’s your protein, fat, and carbs. Once you get the hang of it, it becomes so much easier to track them and stay within your recommended percentage each day.

She learned what foods would help her fuel her body and her brain. She switched up her diet and really focused on improving her nutrition, which is something she had never done before. Amazingly, she was bouncing around with energy and felt more alive than ever.

Are You On Your Own Weight Loss And Wellness Journey?

If so, I’d love to hear all about it!

Head over to our Facebook group and join to take part in the discussions. And here’s a fun idea... if you have any before and after photos of your weight loss journey, please share them with me on Instagram and tag me @organize365, I’d love to see how far you’ve come and plus, it’ll motivate me to keep going with my own wellness journey, too! 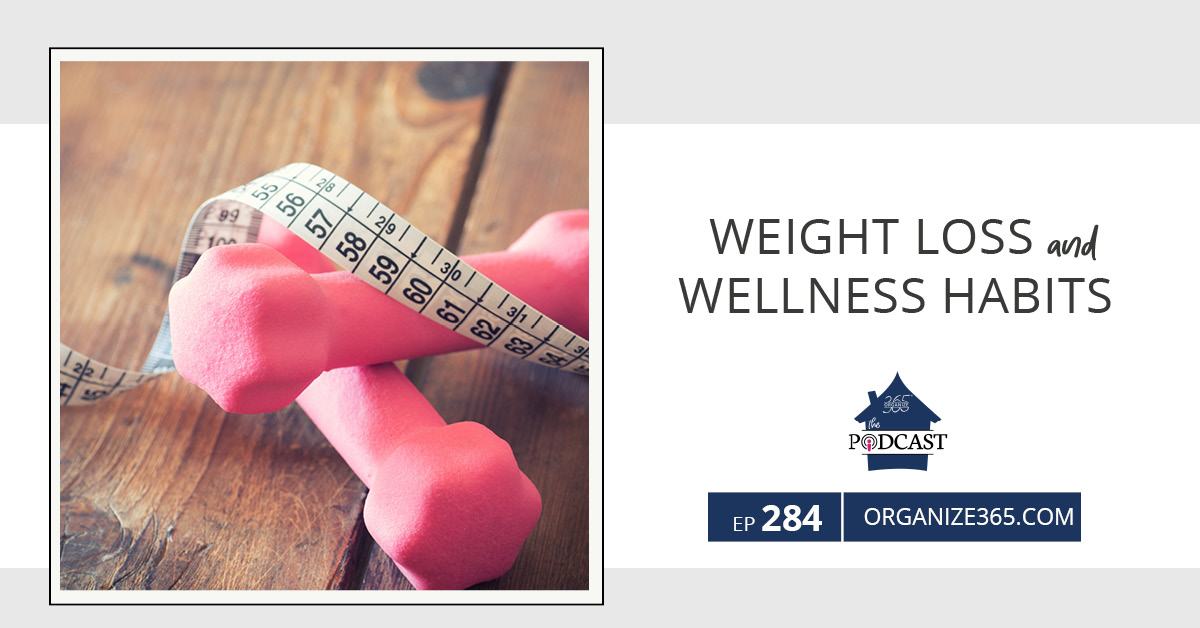 Did you enjoy this episode? Please leave us a rating and review in your favorite podcast app. See this post and coffee chat episode for help setting up a podcast app as well as how to leave a rating and a review. Share this episode with a friend and be sure to tag Organize 365® when you share on social media!